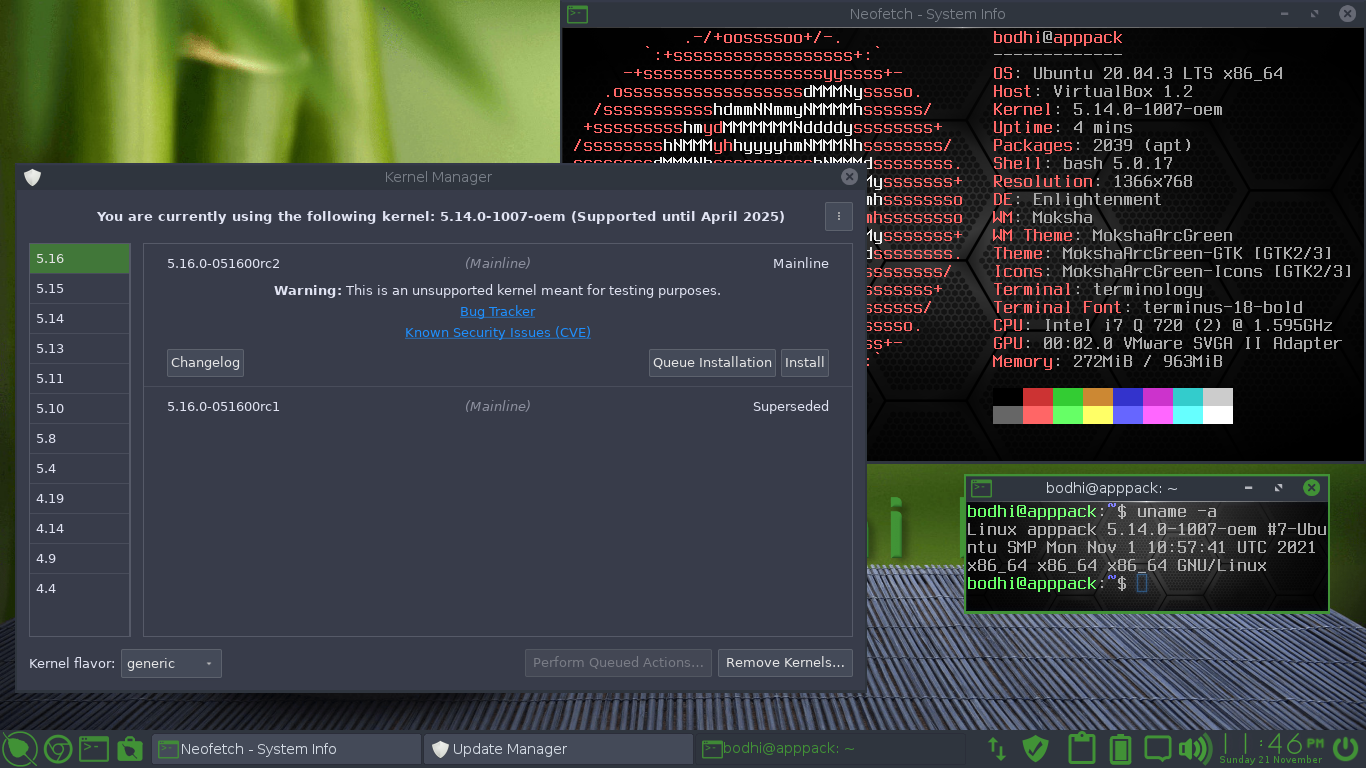 Bodhi Linux (Standard/AppPack/Legacy) by default, do not automatically check for kernel updates during apt update. If you want a different kernel, perhaps for security, or perhaps to support some new device or feature that has been added since the kernel was originally installed with Bodhi Linux (or so others don’t hassle you when they see a screenshot with a kernel that isn’t the very latest), there are several options.

“The decision to not forcing kernel updates on users was Jeff Hoogland’s decision made a long time at the beginning of this distro. Traditionally we have left this decision to the end User. Jeff’s reasoning was that kernel updates can sometimes break things, usually as in lose hardware support. I have merely continued this tradition with the two releases I have made.

Are you less secure if you do not update your kernel? In some cases clearly yes. The security of your system is your responsibility. I pay close attention to kernel updates myself. Even read the changelogs. I stick with Ubuntu kernels usually but I do update the kernel.”

Option 1: Upgrade to the latest point release of the version Bodhi Linux shipped with

Point releases fix bugs and address security issues, but rarely add any features or break working hardware. For example Bodhi Linux Standard 6.0.0comes with 5.4.0-72, while this option provides 5.4.0-90.  Keeping this up to date is mainly for security; the only real disadvantage is it takes bandwidth, time, and requires a reboot to take affect.

The “Hardware Enablement” kernel (HWE) is mainly available to support brand new hardware that was not supported when the Bodhi Linux’s original kernel was released, or if a new feature was introduced in a later kernel you want to take advantage of (…or you like bigger numbers when you look at your system info). The only real disadvantage is it takes time, data, and a reboot to update, though it is possible that a newer kernel version could drop support for hardware that was previously supported, or that an older driver does not work with the newer kernel version.

Option 3: Upgrade to an OEM Kernel

Ubuntu appears to make these kernels available for equipment manufacturers who need even newer kernel than HWE, updating them every 3 weeks. As of now, there are meta-packages for kernel versions 5.10, 5.13, and 5.14 in Focal repositories.

Option 4: Install any version of mainline kernel compiled by Ubuntu

These are pure upstream kernels (built using Ubuntu kernel configuration files), with very new and very old available. They do not include any Ubuntu-specific drivers or patches, nor any proprietary modules or restricted binary drivers.

How To: GUI Method – Update Manager

If you do not have it installed already, install Update Manager:

For mainline kernels only (option 4), select Edit > Preferences > Expert and check the box to enable them. 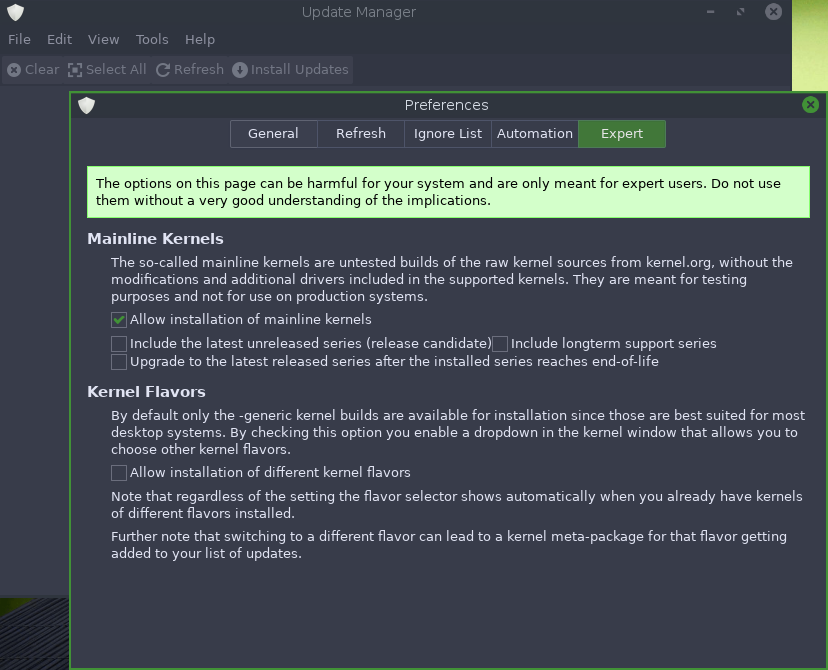 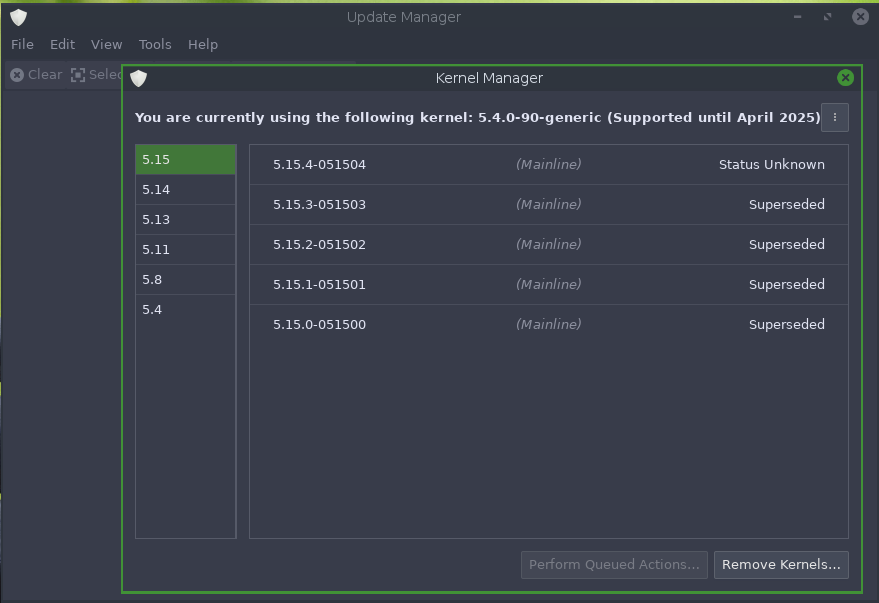 Select the kernel you want and click install. The specific version you select will be installed by the update manager, which will not affect future apt updates.

First, using Terminology (or your favorite terminal emulator), make sure your package database is up to date:

Note 2: This will update Bodhi Linux 5 Legacy from Debian kernel 4.9 to Ubuntu kernel 4.15

Note: this only applies to 64-bit Bodhi Linux 6

First check what is available: 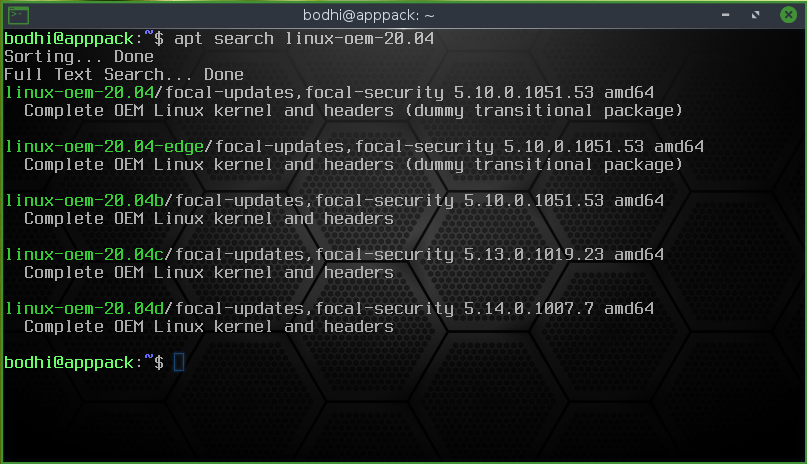 Then install the meta package with the kernel you want, for example for kernel version 5.14 on Bodhi Linux 6.0.0:

Reboot to Use Replacement Kernel

If for some reason your system fails to boot with the alternate kernel, force a reboot and select advanced options from GRUB, find your previous known-working kernel which you can boot, and use it to remove the kernel that does not work. 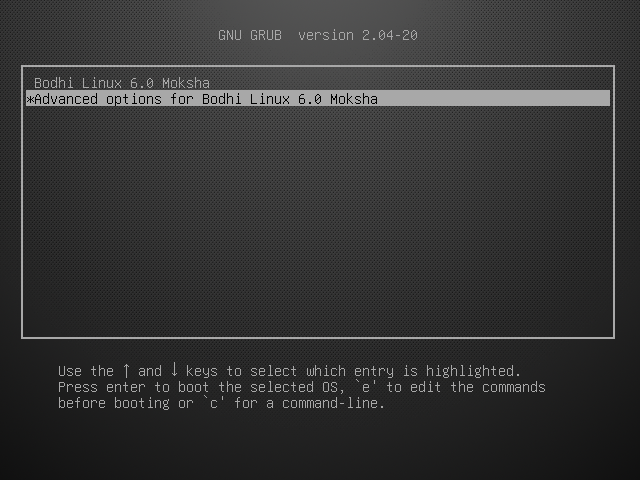 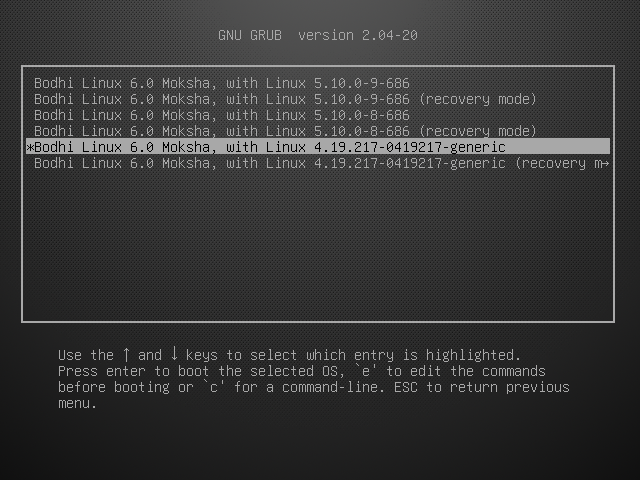