Conky is a light-weight system monitor for X, which display any information on your desktop.  Conky is licensed under the GPL and runs on Linux and BSD.

Working with Conky is similar to making a desktop gadget. It creates a window, which can be disguised by being made transparent. People use Conky to draw various things, often involving computer information such as: how much battery on your laptop is remaining, or what time it is. It makes for a useful and customizable desktop gadget.

This guide contains information on setting up and using Conky.

The conkey-all package has everything you need to get going with Conky.

To configure Conky – first, you need to copy the “system wide” configuration to a local copy, which you can then modify using Terminology. Run this command:

You will need to reboot for Conkey to pick up and start using your local configuration file.

Enable Conky to Start at Boot

Read up on making a personal application launcher, which has general instructions on how to create a .desktop file and then run that file at startup. There’s a specific example (#2) for Conky.

Is your Conky not running with a transparent background?  You can fix that by installing the following module:

After installing the above, you will need to enable the module Compton Mod. To do so, open the Module Settings (Main Menu > Settings > Modules) and enable Compton Mod 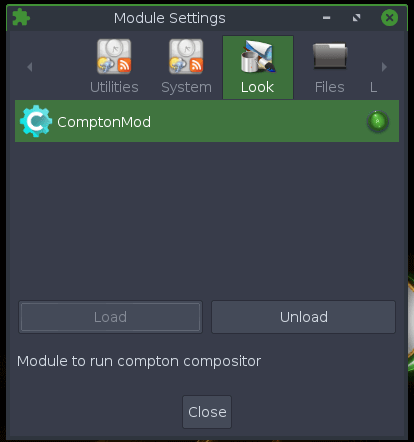 If your Conky configuration is not transparent, you may need to adjust its code to have the following:

It is important that other settings do not conflict with these. For instance, a line written as

should be removed or commented out with a #.

Edit conky.config and add the following:

Instructions on this coming soon…